A modern, inspired interior is the focus at the second concept store by OOG, located in the Old Town of Gdansk, in Poland. Eyewear expert and owner, Adam Kujawski told Eyestylist: “The interior was designed by Marta Napiorkowska-Losin from Manadesign studio. As with our first store in Sopot, we left her to come up with our new concept.”

Inspired by the old-fashioned lifestyle of Gdansk, Napiorkowska-Losin has kept the mood of OOG’s original store, whilst playing with a contrast of natural materials, metal fittings and a fresh colour direction. The result is a trendsetting store design and a reference for the new wave of modern independent optical retail openings in Europe for 2017. 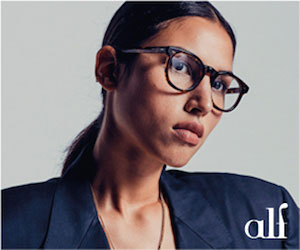 A very special eye test room has been created in the basement of the building. “During the Second World War, the old town of Gdansk and the building was completely destroyed,” explains Kujawski. “It was rebuilt with a mix of bricks that were left in the ruins. In the walls, it is possible to see an incredible mix of Gothic bricks and much more recent ones from the 20th century.”

Graphic artist Oskar Podolski aka OESU One (www.oesuone.com) has also been involved in the design project downstairs, creating a 3d graffiti with a quote by Jose Saramago, roughly translating: “Everybody’s world is what his eyes can see.”